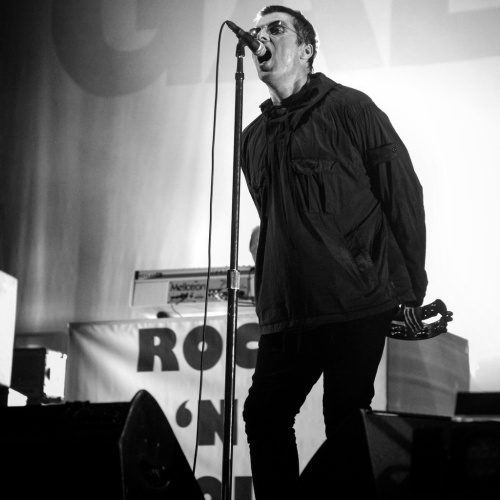 Liam Gallagher’s Les Paul ‘Studio’ guitar and memorabilia from the likes of Eric Clapton, Nile Rodgers and Florence Welch is set to be sold to raise funds for the production staff and stage crew who have lost work due to the Covid-19 pandemic.

The #ILoveLive prize draw by Stagehand – the UK’s only charity supporting live music industry workers who have fallen on hardship – and Crowdfunder hope to raise £1 million this Christmas with the extensive sale to benefit the Music Venue Trust.

As well as Liam’s signed guitar, Clapton has given his personal signed Martin custom shop OM Bob Gruhn acoustic, while one lucky winner could get their hands on handwritten lyrics by the Florence + The Machine frontwoman, Robbie Williams and Ellie Goulding.

Other prizes include a replica of Chic legend Nile’s 1957 Hitmaker Fender Stratocaster, which the ‘Le Freak’ hitmaker most recently used for Daft Punk’s 2013 hit ‘Get Lucky’.

FKA Twigs’ rare mask worn during one of her shows, Royal Blood star Mike Kerr’s jacket which he donned during the rock duo’s 2017 Glastonbury show, and a £10,000 box set by prog rock star Steve Wilson will also be sold.
Plus, a bass guitar and pedal used by Nick Cave and a signed synth by the Chemical Brothers.

The prize draw was suggested by Ian McAndrew of Wildlife Entertainment, who manages Arctic Monkeys, whose frontman Alex Turner’s Fender Stratocaster guitar recently raised £128,544 ($169,031) in a charity raffle to help save grassroots venues.

Mike Lowe, the Chair of Stagehand’s Board of Trustees, commented: “We know that when live shows can take place again in financially viable ways, the industry will be extremely busy. Artists, festivals and venues just want to get back to work and the public are hungry to see live entertainment again. No live show of any kind can happen without the skills and expertise of the army of live events workers. I am sure that the live events industry workers who we can help, will join me and my fellow trustees in expressing our massive appreciation for making all of this happen in the most difficult and unprecedented of times.”

Rob Love, CEO of Crowdfunder, added: “This is a really exciting campaign and we are thrilled to be partnering with Stagehand and an array of incredible talent. Running prize draws with money-can’t-buy prizes can be a really effective fundraising tool. This crucial campaign will help support the ‘behind the scenes’ workers in the live music industry who have been left without work for months.”